Memories of princesses and warriors

Siurana was the last Muslim stronghold in the territory now called Catalunya. Had already fallen Tortosa and Miravet, when Siurana still resisted. The cliffs of la Gritella and its powerful castle cut the path and made it practically impregnable place. However, the luck of Siurana was determinate.

The legend explains that just before the defeat, the daughter of the Valais of Siurana, the beatiful Abdelàzia, appeared riding a magnificent white horse, and went quickly to the cliff close to the castle. When she arrived, the animal made an impressive lap and together disappeared deathly in the vacuum. The unbelievers will found the footprint of the horse of the princess printed in the rock, as a proof of the last run of the horse carrying Abdelàzia to immortality.

The proposed route, invites you to dream in moorish princess and the gold glory days of Siurana, but mostly allows you to reliving two historical accesses - probably the most evocative- from this singular and captivating place.

ROUTE: To start the tour, you must take the Trona's road, which starts, next to the ruins of the castle, in a extreme of the esplanade actually used as a parking. The first part is absolutely stunning.

We walk along a narrow trail that cuts the vertical walls, which look to the valley of Siurana's river. This is a lovely bridle path, which in other times was a busied trail by the villagers of Siurana who go down everyday to the river to work in the orchads that extended next to the river

The trail leads to a track [2]. Which you have to follow to the right, toward the reservoir to almost walk to the tip of Siurana. Then, at the right, passing a small slope, you found a trail that connects the old way from Cornudella to Siurana by the ravine "Barranc de l'Estopinyà".

This historical trail still keeps the old pavement, with few centuries old, that seems essential to capture the singular character of Siurana. You just have to follow it to return to the village.

It's not a very long walk and it's really stunning by its views, the cliffs and the medieval trails that you walk. The path of Trona, but, can be "airy" for people with height ache and must be careful if it's done with children. Siurana is, without doubt, one of the most captivating places of Catalunya for the intensity with nature and history appear. The sunsets usually are unforgettable 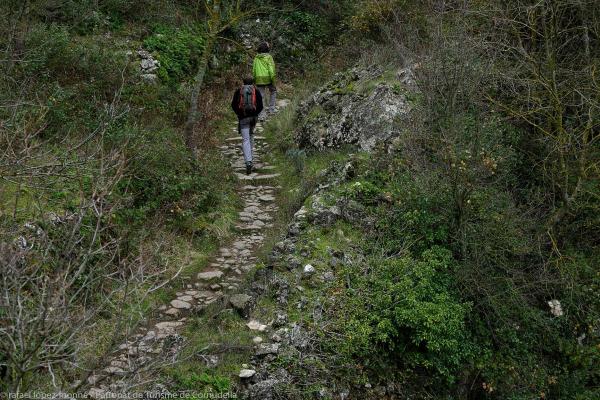